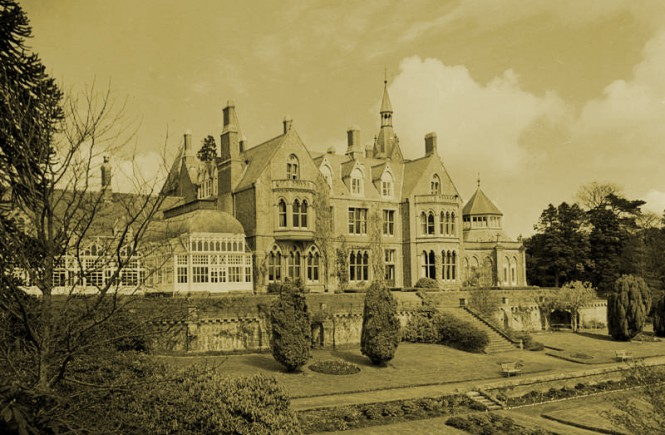 Hafodunos had been a name which was familiar to me for many years. I tried to find it several times, but unsuccessfully. A good friend of mine, the late Don Richards, had talked profusely about this forlorn gothic mansion hidden in the woods near to Llangernyw but had never really explained how to get there. When I eventually stumbled across the house it was a surreal experience to witness a building which had just literally been abandoned; there was still food in the kitchen cupboards and carpets on the floors! Despite neglect Hafodunos’ isolated position had saved it from any serious vandalism, so what one encountered was very much as it had always been. In respect of this I thoroughly photographed the interior and exterior as I had an awful feeling that something tragic would happen to the house in the not too distant future.

Whilst on an archaeological trip to Plas Teg, Mold I received a phone call from an old school friend who was watching the Six O’Clock News, which reported that Hafodunos had gone up in flames and that the main house had been gutted by fire. Everyone in the car fell silent as I announced the news and I in particular, was utterly shocked by what I had just heard. It was at that moment that I decided to research a book in order to preserve for perpetuity the history of Hafodunos. Then the fun really started with collecting information about the development of the house and estate. I must give huge thanks to Auriol, Marchioness of Linlithgow, who as a direct descendant of the builder of Hafodunos permitted me access to her private family collection and papers. Another great help was Gillian Slater, the organiser for the Hafodunos Hall Girl’s School Reunion who put me in touch with many ‘old girls’ who had been to school there.

Concurrently, I was studying for my BA so the research for Hafodunos coincided with various University projects which eventually were turned into chapters of the book. As with most houses there were tales that were more apparent than others; one of these was the prolific yet short life of Margaret Sandbach whose poetry had been inspired by Hafodunos.  Much of the book was actually written whilst staying at Gwydir Castle, Llanrwst and in the grounds of Hafodunos which I felt allowed a deeper connection with the story of the house.

I decided to release the book to coincide with the first anniversary of the fire on the 14th October 2005.  Prior to the book’s official release, a copy was presented to the Culture Minister of Wales at the time; Alun Pugh AM following a meeting to discuss the future of the house.  Since then, the publication has been a source for those interested in the work of Sir George Gilbert Scott and Victorian domestic architecture, local history and also it was used as an advert for the property whilst it was up for sale.  Let us hope that one day Hafodunos will rise like the phoenix from the ashes and once again be resplendent in its Gothic glory.

Hafodunos Hall is one of the most important buildings at risk in Wales, playing a key part in Welsh cultural history during the nineteenth century. Its rooms and galleries were once the home to the largest collection of sculpture by the famous Welsh sculptor, John Gibson. It provided much inspiration for the renowned poetess Margaret Sandbach, author of “Aurora” and first wife of the builder of the Hall. Hafodunos was designed by the eminent architect Sir George Gilbert Scott and is described as his most spectacular example of domestic architecture in Wales. A famous conifer arboretum and plant collection was gathered from all over the world and grown within the gardens which were advised upon by Sir William Jackson Hooker of the Royal Botanic Gardens at Kew.

Neglected for years the house had become a haven for vandalism and theft; the Victorian Venetian-Gothic masterpiece’s famed interiors perished in a devastating fire on 14th October 2004. What were the events leading up to its sad demise? Could they have been prevented? Whatever happened to the Gibson collection? All of these questions can be answered in what is the first ever publication on the history of Hafodunos. Much unpublished material has been used to create the most comprehensive review of one of North Wales’s most illustrious estates.

DESPITE the success of his previous publications on Gwrych Castle in Abergele, Mark Baker from Prestatyn, has been surprised by the popularity of his latest book

He unveiled Hafodunos Hall – Triumph of the Martyr, about the once spectacular Llangernyw landmark, on October 14 – the first anniversary of a fire which put its future in jeopardy. Ironically book sales have probably been higher because of the blaze, which was reported by most local and regional papers in North Wales.Even Mark recognises that, as in the introduction to the book he writes: “Few had heard of Hafodunos Hall until that fateful night in October, 2004, when its sorrowful fate was splashed across the national press.” Prior to that night, many were not aware the historical hall even existed. But Mark is keen for it to be known for more than the fire and in his book gives countless accounts of the significance of the hall, making readers fully aware of the reasons why the arson attack was so devastating.

Tucked away in Llangernyw, a village inland from Abergele, Hafodunos has a history which could have filled several books. But Mark has successfully managed to get it all in to one, while at the same time ensuring the book retains great detail.For anyone interested in historical buildings, this book will make gripping reading. It is broken up into 13 chapters, each one detailing a particular period in the hall’s history. In some ways, it makes a somewhat poignant read, following it from its glory days to its recent decline. It is obvious a lot of hard work and research has gone into producing it to the point you wonder where the 20-year-old found the time to write it, in between his ongoing campaigning to save Gwrych Castle and reading history and archaeology at university! Much of the material and information contained in what is Mark’s fifth book has never been published before.

“Most of the material which does exist in the public domain refers only to the Victorian mansion, virtually nothing has been said on its earlier incarnations,” said Mark. “This is also true of its later and most recent history, following the sale by the Sandbach family in 1934.”

Mark hopes raising awareness about Hafodunos will ensure it is resurrected from the ashes, a dream shared by Auriol, Marchioness of Linlithgow, whose great-great-grandfather, Samuel Sandbach, bought the Hafodunos estate in 1833. It remained in the family for over 100 years.In the foreword to the book, Auriol writes: “I am enormously grateful to Mark Baker for producing this splendidly researched account of my former family home. I can only hope that in doing so, it will provide the necessary inspiration for someone with the sensitivity and passion to undertake the worthy resurrection of this remarkable house.” lHafodunos Hall – Triumph of the Martyr costs £9.99 and is available from The Stag Inn, Post Office and The Bridge Inn, Llangernyw; Post Office, library and Whiteside’s newsagents, Abergele; Siop Ganol and post office, Llanddulas; Siop y Morfa, Rhyl. 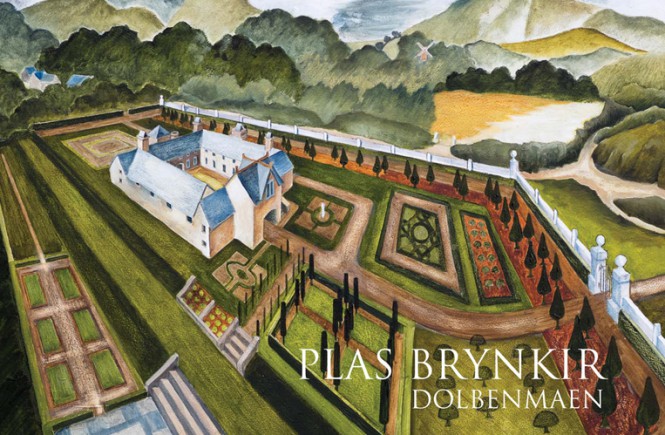